(Originally printed in the Spring 2019 edition of Chamber Magazine, published by the New Castle-Henry County Chamber of Commerce. 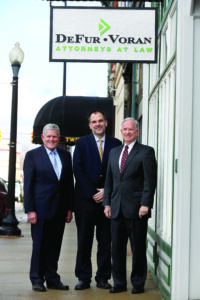 Used with the permission of The JMetzger Group and New Castle-Henry County Chamber of Commerce.)

One of the more recent downtown New Castle business occupants isn’t new at all. In fact, the roots to the community run deep to the early days of the city.

DeFur Voran LLP has had an office in New Castle since 2006, located on Memorial Drive. Senior Attorney David Brock, a California native who has lived in Henry County for 32 years, and Partner Jon Madison, a New Castle native, split their time between the New Castle and Muncie offices.

DeFur Voran’s main office is in downtown Muncie, the city of its founding.

Downtown New Castle is reaping the rewards of a long-term community commitment to improvements.  “Although the roadwork process on Broad Street was long and frustrating for Downtown merchants, it’s finished, and we are seeing the benefits,” said Shaun DuFault, Executive Director of the New Castle-Henry County Chamber of Commerce. Beautification projects, art installations and rehabs undertaken by building owners are combining to create a new-found vibrancy downtown.  “Downtown Chamber members are thriving,” DuFault said.

“Jim Borgmann was adamant about downtown locations whenever possible,” Brock said. “He is a strong supporter of Muncie’s downtown, and feels strongly that downtown presence and involvement is very important.” Borgmann is DeFur Voran’s managing partner.

When presented with an opportunity to merge the practice with that of long-time New Castle attorney James Millikan, the choice was obvious. The prospect offered an unusual arrangement. Millikan is employed by DeFur Voran as a senior attorney, and he is the company’s landlord for the office building he owns at 1315 Broad St. in downtown New Castle. The Millikan family has been in New Castle for generations. In fact, a framed plat map from 1857 shows the family name as a landowner. Upon graduation from the IU-Indianapolis (now McKinney) law school and the attainment of his license in 1975, Millikan joined the practice run by his father, Thomas Millikan, a Harvard law graduate. “I was a part of his practice until his death in 1979,” Millikan said.

In 1989, Millikan had the opportunity to purchase the Broad Street building. “It was unoccupied for about 10 years,” he said. Built around 1900 or before, it required extensive remodeling and every effort was made to have the interior match the age of the structure, even though all the materials were new.

“During the remodeling, we found the original tin ceilings when we removed the dropped ceiling,” Millikan said. Also located during the process: Original lighting pendants that hang in the main hallway. The result is a warm, welcoming space with generous-sized offices and a conference room lined with shelving for law books.  A couple of years ago, Millikan “freshened” the interior with new carpet and paint.

Madison notes that in today’s age of instant communication and electronic filings, close proximity to the courthouse isn’t as important as it once was. “But having a full-time office is a real advantage,” he said. He and Brock continue to divide time between Muncie and New Castle, but Millikan is full-time in New Castle, so the office is open every day. The former DeFur Voran office was open only on Tuesdays and Fridays, and by appointment. Since Millikan’s staff joined DeFur Voran, the current office is open 8 a.m. to 4 p.m. Monday through Friday.

Both Madison and Millikan participate in a wide range of practice areas, and Brock’s emphasis is on estate planning and business law and works with a lot of small businesses. When local clients have more specialized needs, DeFur Voran attorneys can come to the New Castle office from other locations. The downtown building provides space for those meetings. The spacious interior accommodates mediations and other meetings not possible in the Memorial Drive location, and allows for potential future expansion.