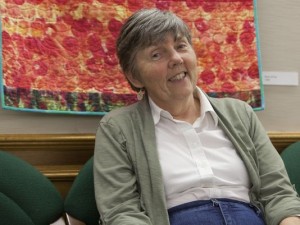 COREY OHLENKAMP/THE STAR PRESS Barbara Moll sits in the room at Minnetrista where her quilts are on display. Moll’s work is also featured at the Indianapolis Museum of art.

That Barbara Moll’s fantastic quilts are fine art is indisputable to anyone who lays eyes on them. Walking into Minnetrista’s Indiana Room, her wall-hangings, ranging from works nearly small as placemats to others approaching 5×7 feet, seem ablaze with color, captured in forms from the traditional to the abstract, the former being well outnumbered.

Approaching Barbara with an outstretched hand, she greets you warmly but with a questioning look in her eyes, one that seems an attempt to pierce the veil that has masked her memory and stymied her extraordinary creativity, a veil in the form of Alzheimer’s disease.

“She still senses that she was an artist,” said attorney Jon Moll, Barbara’s husband of 48 years.

Indeed, the mother of two was. Beginning in the 1970s she began pursuing quilting as an art form, launching a career she later treated with wry humor in writing about her work: “I completed two art degrees at Indiana University before learning what my Hoosier grandmothers had done without a high school education.”

As her expertise grew and she mastered new techniques, she landed teaching jobs and exhibitions that took her all over the U.S., including to Stanford University, and abroad to Hiroshima, where her 30-quilt series on the atomic bombing won her notoriety. There were publications, too, with her work even making it to the pages of no less lofty a magazine than McCall’s 115th anniversary edition.

“More recently,” Jon wrote us, “perhaps a year or two ago, the Indiana State Museum added two of Barbara’s quilts to their permanent collection of prominent Hoosier artists.”

The Molls moved to Muncie in 1971 after his service as a Navy JAG attorney.

“She was primarily a weaver at that time,” Jon recalled, noting how she became interested in his grandmother’s quilting, and how pursuing that interest expanded her social network. “She had a lot of people she developed really close friendships with.” She also began accepting commissions for quilts, among them from Ball Corp. and First Merchants.

“For a long time she was very prominent,” recalled her good friend, artist Ann Johnson. “She’s an international quilt artist.”

Another close friend of Barbara’s is Sandra Worthen, wife of former BSU president John Worthen. When the Molls visited them at their home in Steamboat Springs, Colo., they asked her to create a quilt for them. The untitled piece is on loan to the Minnetrista show.

“I think it took well over a year,” Sandra said, of the large work that features 12 panels, and was the quilter’s final completed piece, one she researched on mountain hikes. “We were very pleased with it. I thought it was a testimony to her creativity.”

Many of his wife’s works had what Jon called a “quirky” streak, recalling a women’s liberation-related one employing bras, another about guns that she had some cops shoot full of holes, plus another spurred by a friend”s suicide. He has heard others say that work convinced them not to take their own lives.

In viewing her work on display at Minnetrisa, you encounter a few from the traditionalist school. “Mildred Trivers,” done in 2002, pictures the late local poet in wheelchairs, awash in pastels. An exact opposite in mood, “December Morning 1941” with its billowing black smoke, is an unmistakable representation of a burning battleship at Pearl Harbor.

The abstract quilts are just as captivating, or even more so.

Titles include “The Hate Will Be Great,” “The Big Flash” and the fossil-like “Incrustation.” “In My Dreams” looks like a dark abstract cityscape, while “Jubilation” and “Guatemalan Market” seem downright joyful in their soft forms and swirls. Others hint at the unspeakable, like “Blasted Lives of Children” and “No One There to Wear the Slippers.”

Through it all, you are struck by her richly dyed colors. Admiring all these, it’s sad to think that Barbara, who was diagnosed in 2004 or so, can no longer work, though Jon has many of her pieces back home. How many quilts did she make?

“Oh, man,” he answered with a quiet laugh. “How many hundreds?”

It is, to be sure, an artistic legacy that will remain. “Every time I look at one, it”s amazing,” said Barbara’s friend, Deidre Thompson. “I don’t know how she did it.” Johnson agreed.

“Here’s a woman that was so brilliant, and Alzheimer’s has taken so much from her,” she said, while adding how happy she is this well-deserved show has been put together. “I think there’s going to be great excitement in the arts community about this.”